Saadani National Park is Tanzania's 13th National Park. Tourists can view animals basking along the Indian Ocean shores. It has an area of 1062 km2 and was officially gazetted in 2005, from a game reserve which had existed from 1969. It is the only wildlife sanctuary in Tanzania bordering the sea.[2]

Since 2005, the protected area is considered a Lion Conservation Unit.[3]

Gazetted in 2005, it encompasses a preserved ecosystem including the former Saadani game reserve, the former Mkwaja ranch area, the Wami River as well as the Zaraninge Forest. In the late 1960s Saadani Village – the village after which the park has been named – and particularly its sub-village Uvinje, invited the Tanzania Wildlife Division (WD) to help them to prevent the indiscriminate killing of wildlife prevalent in the area. From this partnership Saadani village and the Wildlife Division established the Saadani Game Reserve (SGR), with the agreement to respect the land rights of the coastal sub-villages of Saadani, including Uvinje and Porokanya sub-villages, while also addressing the needs of wildlife. 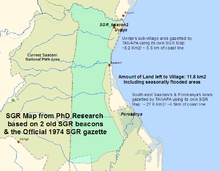 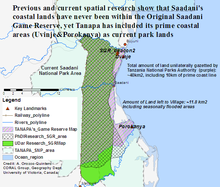 The total extent of SGR is said to have been approximately 209 km², however, the SGR official gazette document states that it comprised approximately 300 km²,[5] while some of TANAPA’s official documents indicate it was 260 km² . Spatial analysis conducted as part of the present research suggest that the total game reserve area was of about 200Km2

The vagueness of the language used in the reserve’s official gazette,[5] but also TANAPA’s early interventions to develop its own map of the reserve, and its interests in Saadani’s sub-villages’ prime coastal lands have come to challenge Saadani’s coastal sub-villages’ rights to lawfully inhabit their traditional territories, and have led to chronic political and other battles to demand presently gazetted park lands rescinded, the reestablishment of land rights to traditional inhabitants, and to demand from TANAPA to honour commitments made earlier by Wildlife Division.

By law, setting aside areas for conservation has to be consulted on, at least to some extent, with affected villages. However, it was not until late in 2005 that the village of Saadani and leaders of its Uvinje sub-village realized that the full extent of Uvinje’s lands were gazetted as part of the park. This despite numerous communications taking place since the early 2000s where village leaders continuously reiterate that Uvinje lands have never been a part of the reserve and that they will not vacate their lands . Important park establishment documents illustrate that TANAPA’s argument for gazetting lands from two Saadani coastal sub-villages is that they have always being part of the former game reserve, an argument that seem to have allowed them to move forward gazetting the coastal lands without coming to an agreement with the leaders at that time, who have reiterated that they did not agree to giving coastal lands to TANAPA. 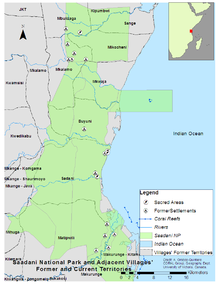 In summary, the SNP boundaries and lands have been officially contested[6] by District authorities and no less than 6 villages, while at least 4 adjacent villages are engaged in higher level advocacy to have park boundaries reassessed. However, of all the villages, it is Saadani which faces the greatest challenges on the gazetting of a large part of its coastal territory which, by all accounts, has been done unilaterally. Saadani is also the village with the largest strip of coastal land.

At present, and after more than a decade of institutional struggles, Saadani village has resisted TANAPA’s various approaches to take possession of the now sub-village’s gazetted territory and have consistently demanded that their land rights be restored, and continue to reiterate that they are not going to give their traditional territory for any amount of compensation money.[7] Such community assertions and actions certainly challenge traditional conceptions of economic gain as the central motivation in park community-conflicts, and suggest that deeply rooted spatial-cultural territorial connections are as essential as and perhaps even more important to people's collective welfare than material benefits.

To this day, park governance and management approaches have been unable to gain the support of surrounding villages, which traditionally have been very conservation minded, for addressing poaching and for collaboratively sustaining landscape level conservation efforts. All of which are desperately needed to combat the sevenfold increase in poaching activity being faced by the park in the last seven years. No less than 10 of the 17 villages adjacent to the park have their own community-conserved areas, equivalent to no less than 20% of area identified as park lands. Despite the level of environmental awareness of these adjacent villages and the importance of corridors and ecosystem connectivity to successful ecological conservation, the villages’ conservation efforts have not been linked to park efforts but at present represent a threat to park authorities. For park authorities, it is within villages’ conserved areas where more often than not poaching is seen to be taking place.